This week’s photo challenge topic ‘details’ instantly reminded me of the delicate stone detailing in the palaces in Rajasthan. This one is from a palace in Jaisalmer Fort. 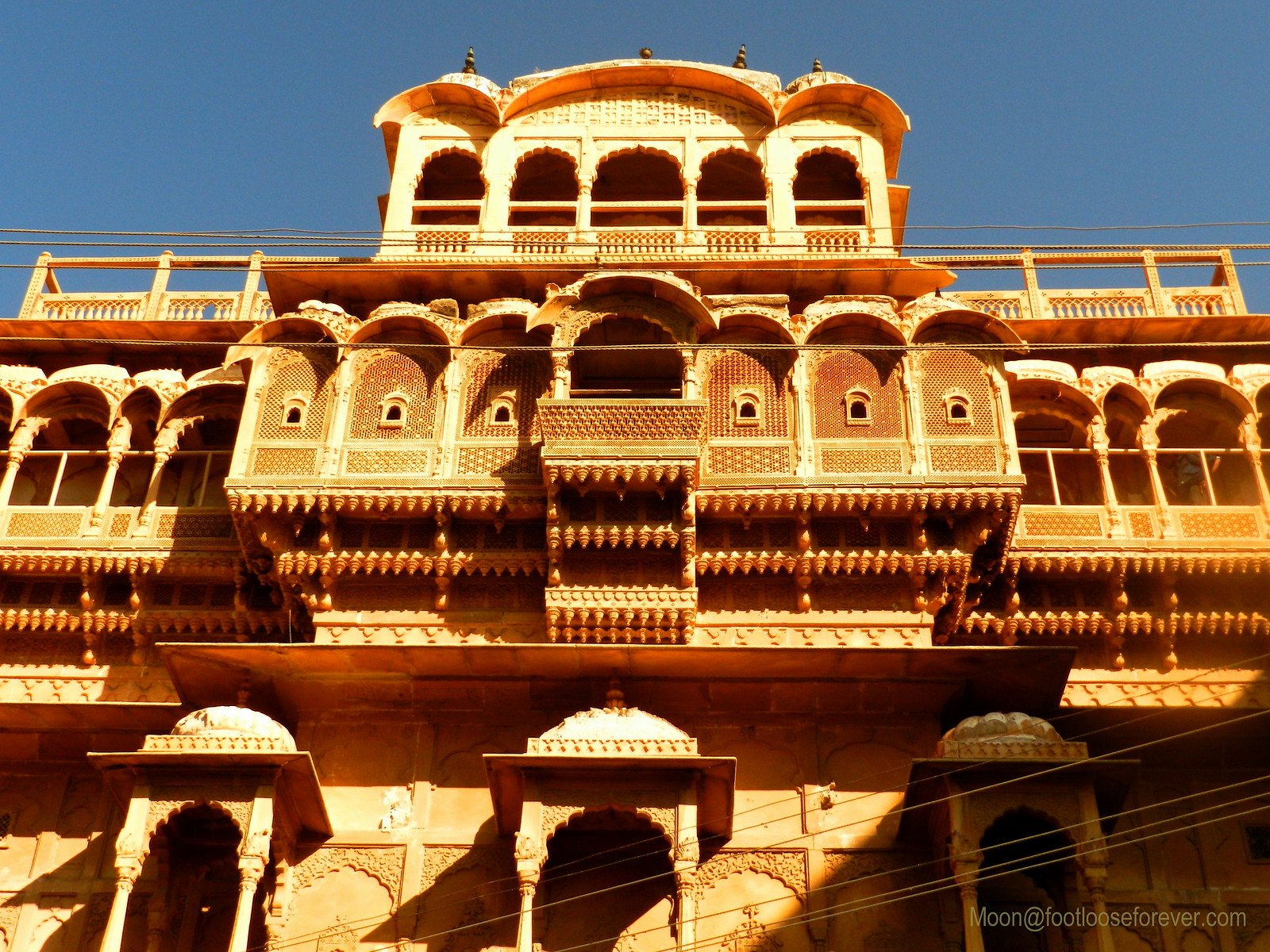 Published in response to The Daily Post Photo Challenge: Details.

P.S: This is my first entry for this week’s challenge. Here is the second post on Details.

After a wonderful day in Mount Abu our next destination was Jaisalmer as per our  itinerary – Jaipur – Pushkar (via Ajmer Sharif Dargah) – Udaipur (via Chittorgarh) – Mount Abu (via Haldighati) – Jaisalmer – Jodhpur.

I was well acquainted with the name Jaisalmer and some of its characteristics since childhood just like every other Bengali kid who has seen the movie Sonar Kella by Satyajit Ray at least once in their schooldays. 🙂  Scenes like Feluda and company chasing a train through the desert mounted on camels or the little boy Mukul searching for his home of the past life inside the fort are unforgettable.

Anyway, it was a tiring 10-hour long bus journey through the scorching desert land. We reached Hotel Sudarshan, a budget hotel with room rates ranging from Rs 300 to Rs 700, at around 7 pm. The rooms were small but appointed with all the necessary furniture. There was a spacious marbled bathroom with hot and cold water supply. The most notable thing about Hotel Sudarshan is it’s traditionally designed interior and exterior. Jaisalmer Fort was clearly visible from the hotel’s rooftop dining hall.

Rajasthan is a large province and a versatile place with its exotic landscapes, rich cultural heritage and a plethora of remarkable architecture spread across its various cities and towns. If you want to experience Rajasthan beyond its royal legacy Jaisalmer is the place to visit.

Jaisalmer Fort is the oldest living fortified town in India. Today it is the main attraction of the place. The fort is now popularly called Sonar Kella or Golden Fort after Satyajit Ray’s movie Sonar Kella which was mostly shot in Jaisalmer. Our guide Mr Raju Sharma said Jaisalmer Fort was popularized because of Ray’s movie the story of which revolves around this fort mentioned as “sonar kella” several times in the movie.

When we reached the main gate of the fort its gleaming sandstone exterior turned golden yellow under the glaring desert sun.

Established in 1156 AD by the Rajput king Rawal Jaisal on top of Trikuta Hill Jaisalmer Fort is now a UNESCO World Heritage Site. The fort is dotted with a number of temples and mansions (called haveli in vernacular). We started the walking tour with the Jain temple decked in intricate stone detailing on exterior walls and columns. Inside you’ll see the statues of sacred Jain preachers (tirthankar) including the last and most well known Mahavira. The interior artwork is equally beautiful and reminded me of Dilwara Temple in Mount Abu.

We wandered along the zigzag lanes of the fortified town, visited some of the merchant havelis and Sonar Kella movie shooting spot, bargained at a craft shop and not to mention took a lot of photographs.

Some portions of the fort are in dilapidated state while some buildings and structures stood the test of time.

While we made our way to the main gate of the fort we came across this narrow alley which reminded me of Varanasi, the oldest living city in India.

Gadisar Lake is another must see in the fort premise. The lake was created to store rainwater. Our guide said it is one of the largest manmade lakes in Rajasthan.

Note: The guides charge to show the lake, temple and fort was Rs 400 for our group of 28 people.

The evening was reserved for the most coveted as well as exciting event – camel ride and sunset watch in Thar Desert.

Next was an enthralling folk dance performance at Oasis Camp Resort. From dancing on a small metal platter while carrying 6-7 earthen pots stacked on top of their heads to walking on burning camphor the dancers did it all with their extraordinary skills. The entire show was mind blowing! I returned to hotel in complete contentment that night.

Note: The total cost of camel ride at the desert and folk music show was Rs 330 per person. The entire arrangement was done by our hotel’s travel desk.